The Etchings of Ralph M. Pearson

"THOUGH Ralph M. Pearson, of Ranchos de Taos, is still young — he is under forty — we find that he has already passed through "three periods," and all three are represented in the Stendahl Gallery at Los Angeles. In the first period he followed the illustrative method. In the second he became more interpretative. In the third, which is the present one, he is decidedly abstract in his rendering of form. He has become a modernist, a weaver of patterns, that are most carefully and subtly calculated to charm the eye, as they often do.

Through all three periods of his development he has shown himself to be a thoroughly trained craftsman and an artist. I think I like him best of all in the small, and sometimes big, etchings from New México that he made just before he entered the third period, when he drew and modeled his pueblos so beautifully, giving US the very texture of the adobe by a clever and original manipulation of the etching needle.

His "San Felipe," the etching that is his gift to the associate members of the Print Makers of California for 1922, belongs to this transition period, though it encroaches very closely on the present manner of interpretation — simple or intricate, as you care to look at it. The artist himself thinks it has much of the simplicity of the primitives, who, he declares, were the only true creators. Between the primitives and the modernists (the modernists are really belated or rediscovered primitives) we find very little creative art, so we are told.

Like all true artists, Pearson is a tireless experimentalist, and it is through study and experiment that he has arrived where he is today. In his old way of doing things he exhausted his subject with one plate; now, attacking the problems from many points of view, he may keep right on working from the same subject. This is exactly what Monet did with his haystack and lily pond, you remember. The modernists, we are led to believe, and are much inclined to believe, are the "discoverers" of our time. Looking at the matter in this way, you will be saved from the fatal error of derision. Remember, again, how bitterly Monet was attacked, and how triumphantly he emerged from it all.

Having prepared you to look at Ralph M. Pearson's etchings, the old as well as the new from his needle, with a fair and open mind, I will now proceed to offer you some criticism, for and against, on his later plates. The older plates were so like the etchings of other good men, so true to the tradition of their time, so fine as "illustrations," indeed, that they took prizes and medals on every hand. and they are to be found in the permanent collections of the Congressional Library, the Art Institute of Chicago, the New York Public Library, the Rochester Art Museum, and many others.

The comments herewith appended are all on Pearson's new work, and are taken from various letters received by the artist. The last one printed comes from his Boston dealer. There is something to be said, of course, for his point of view, but a careful study of "Cypress Grove," "House and Rock, Carmel Highlands," "Carmel Mission," and "El Cerrito, Berkeley," convinces us that the point of view of Pearson's other correspondents gives US a pretty broad outlook on the promise of art.

From Berkeley: "The Cypress" plate absolutely satisfies me. It is all one piece. I can't see the design so much. You have rescued the cypresses from impression and released them into sculpture.
Click on image panes below for more complete information, availability, and pricing. 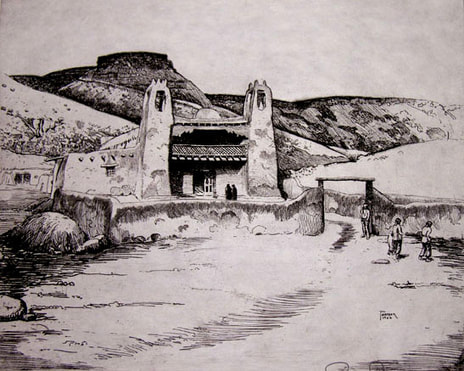